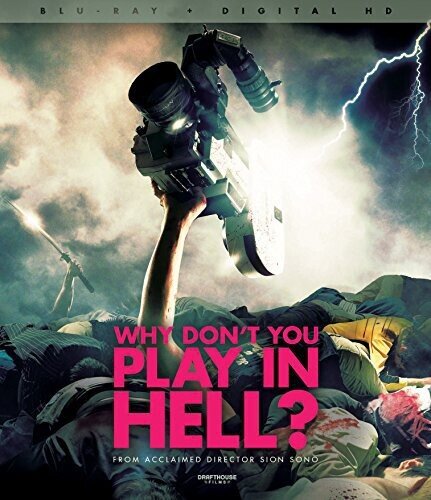 Master filmmaker Sion Sono (LOVE EXPOSURE; COLD FISH) describes his frenzied, gleeful new masterpiece as an action film about the love of 35mm. Based on a screenplay he wrote nearly fifteen years ago, WHY DON'T YOU PLAY IN HELL? is among Sono's very best work, as his trademark excess and outrageousness is infused with an affection for the previous century of Japanese cinema. This is Sion Sono with his talent and unique vision completely unleashed. There's a war going on, but that won't stop the inexperienced but eager wannabe film crew the F Bombers from following their dreams of making the ultimate action epic. Ten years ago, yakuza mid-boss Ikegami led an assault against rival don Muto. Now, on the eve of his revenge, all Muto wants to do is complete his masterpiece, a feature film with his daughter in the starring role, before his wife is released from prison. And the F Bombers are standing by with the chance of a lifetime: To film a real, live yakuza battle to the death on 35mm! Endlessly irreverent and wildly, hilariously visceral, WHY DON'T YOU PLAY IN HELL? is a Tarantino-esque ode to the yakuza films of yore, and features an over-the-top, blood-soaked finale for the ages.