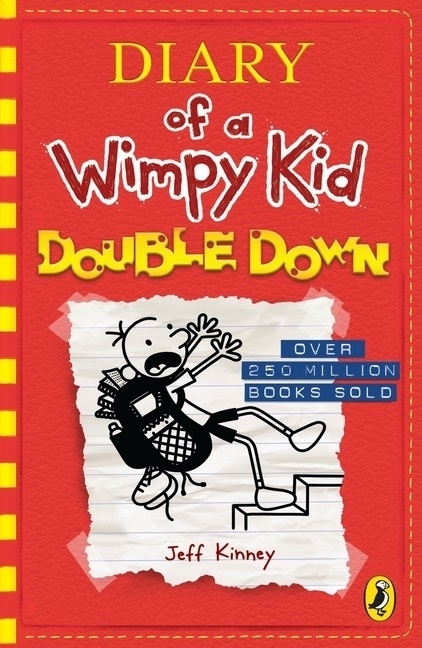 Double Down - Diary of a Wimpy Kid

It's the eleventh book in the bestselling Diary of a Wimpy Kid series! The pressure's really piling up on Greg Heffley. His mom thinks video games are turning his brain to mush, so she wants her son to put down the controller and explore his 'creative side'. As if that's not scary enough, Halloween's just around the corner and the frights are coming at Greg from every angle. When Greg discovers a bag of gummy worms, it sparks an idea. Can he get his mom off his back by making a movie . . . and will he become rich and famous in the process? Or will doubling down on this plan just double Greg's troubles? Praise for Jeff Kinney: 'The world has gone crazy for Jeff Kinney's Diary of a Wimpy Kid' - The Sun 'Kinney is right up there with J K Rowling as one of the bestselling children's authors on the planet' - Independent 'Hilarious' - Telegraph

Jeff Kinney (Author, Illustrator)
Jeff Kinney is a #1 New York Times bestselling author of the Diary of a Wimpy Kid series and the Awesome Friendly Kid series. He is a six-time Nickelodeon Kids' Choice Award winner for Favorite Book and has been named one of Time magazine's 100 Most Influential People in the World. He spent his childhood in the Washington, D.C., area and moved to New England, where he and his wife own a bookstore named An Unlikely Story.