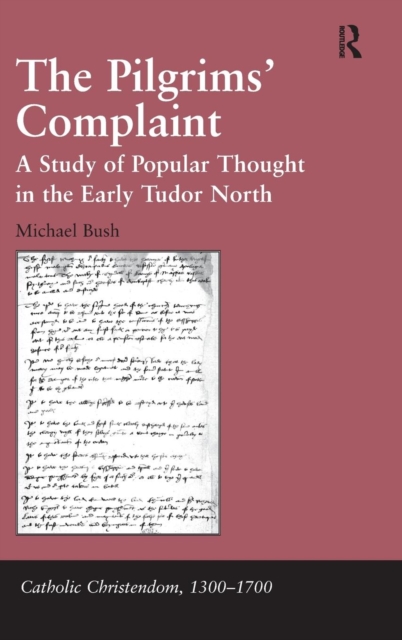 Zusatztext 'Through this close reading of the contemporary complaints the author has more than made good his claim that the Pilgrimage of Grace provides a unique insight into northerners' thinking on religion! politics and society in the third decade of the sixteenth century.' Northern History 'Recommended.' Choice 'Meticulously and exhaustively researched! this last book in what might be called Bush's Pilgrimage trilogy is a fitting capstone! eloquently and persuasively elucidating as much as we will no doubt ever be able to ascertain about how the commons themselves understood this rising of the commons that was the Pilgrimage of Grace.' Renaissance Quarterly 'The Pilgrims' Complaint is an important work that needs to be read by scholars and students of Tudor England; not only does it expand our understanding of the Pilgrimage of Grace! but also it may very well raise new questions for graduate students to pursue in their research.' Anglican and Episcopal History 'Bush's study of popular radicalism during the English Reformation is a welcome addition to Ashgate's series on Catholic Christendom.' The Historian '... this book is an extremely good example of demonstrating the complexities of a historical incident that has been reduced by previous scholars to merely a failed reaction to religious change.' Sixteenth Century Journal 'This remarkable study seeks to unpick the desires and motivations of 'the people' during the series of tumults that constituted the Pilgrimage of Grace of 1536... Through detailed analysis of the Pilgrims' petition material - oaths of allegiance! manifestos! petitions! and prophetic rhymes - Bush focuses on the rising of the commons on their own terms. His handling of this material is refreshing and imaginative and challenges the view that an 'elite/popular' dichotomy existed between the leaders of the rebellion and its followers.' English Historical Review 'This is a very engaging text that is revealin Informationen zum Autor Michael Bush was Reader in the History Department! Manchester University from 1987 to 1994 and Research Professor in the Department of History and Economic History! Manchester Metropolitan University from 1999 to 2003. He has worked on a variety of subjects! including popular politics in early sixteenth-century England; the comparative study of nobility in medieval and modern Europe; and servitude in the modern world. He is now a freelance writer! working full-time on a study of popular radicalism in northern England during the early nineteenth century. Zusammenfassung The Pilgrimage of Grace! a popular uprising in the north of England against Henry VIII's religious policies! has long been recognised as a crucial point in the fortunes of the English Reformation. Historians have long debated the motives of the rebels and what effects they had on government policy. In this new study! however! Michael Bush takes a fresh approach! examining the wealth of textual evidence left by the pilgrimage of grace to reconstruct the wider social! political and religious attitudes of northern society in the early Tudor period. More than simply a reassessment of the events of October 1536! the book examines the mass of surviving evidence - the rebels' proclamations! rumour-mongering bills! oaths! manifestos! petitions! songs! prophetic rhymes! eye-witness accounts and confessions - in order to illuminate and explore the kind of grass-roots feelings that are often so hard to pin down. He concludes that the evidence points to a much more complex situation than has often been assumed! revealing much more than simply a desire for the country to return to the old religion and familiar ways. Rather! this book demonstrates how the rebels sought to use the language of custom and tradition to bolster their own political and economic positions in a rapidly changing world. It reveals a populace at once conservative and radical! able to judge innovati...