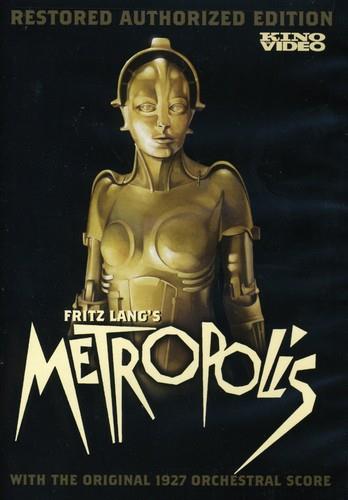 Metropolis takes place in 2026, when the populace is divided between workers who must live in the dark underground and the rich who enjoy a futuristic city of splendor. The tense balance of these two societies is realized through images that are among the most famous of the 20th century, many of which presage such sci-fi landmarks as 2001: A Space Odyssey and Blade Runner. Lavish and spectacular, with elaborate sets and modern science fiction style, Metropolis stands today as the crowning achievement of the German silent cinema.

Kino International is proud to announce the DVD and long awaited first time ever Blu-ray release of the new restoration of Fritz Lang`s 1927 science fiction masterpiece Metropolis, now with 25 minutes of lost footage and the original Gottfried Huppertz score. This new 147-minute version (being released as The Complete Metropolis), opened theatrically in April 2010 earning over $350,000 at the box office, and since it`s original restoration, has gone on to earn $1,000,000 in theatrical ticket sales!

When it was first screened in Berlin on January 10, 1927, the sci-fi epic ran an estimated 153 minutes. After its premiere engagement, in an effort to maximize the film`s commercial potential, the film`s distributors (UFA in Germany, Paramount in the U.S.) drastically shortened Metropolis, which had been a major disappointment at the German box office. By the time it debuted in the United States later that year, the film ran approximately 90 minutes (exact running times are difficult to determine because silent films were not always projected at a standardized speed).

Metropolis went on to become one of the cornerstones of science fiction cinema foreshadowing Blade Runner and The Matrix to name just a few recent examples. Testament to its enduring popularity, the film has undergone restorations in 1984 and again in 1987. The 2001 restoration combined footage from four archives and ran at a triumphant 124 minutes. And at the time was widely believed that this would be the most complete version of Lang`s film that contemporary audiences could ever hope to see. But, in the summer of 2008, the curator of the Buenos Aires Museo del Cine discovered a 16mm dupe negative that was considerably longer than any existing print. It included not merely a few additional snippets, but 25 minutes of "lost" footage (about a fifth of the film) that had not been seen since its 1927 debut in Berlin. The discovery of such a significant amount of material called for yet another restoration, carefully executed by Anke Wilkening of the Murnau Stiftung (Foundation) (the German institution that is the caretaker of virtually all pre 1945 German films), Martin Koerber, Film Department Curator of the Deutche Kinemateque and on the music side, by Frank Stoebel. Regarding the quality of the added footage Ms. Wilkening has said: "The work on the restoration teaches us once more that no restoration is ever definitive... Even if we are allowed for the first time to come as close to the first release as ever before, the new version will still remain an approach. The rediscovered sections which change the film`s composition, and at the same time always be recognizable through their damages as those parts that had been lost for 80 years."