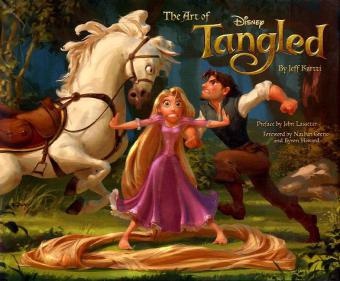 The Art of Tangled

Informationen zum Autor Jeff Kurtti is the author of more than 20 books including The Art of the Princess and the Frog. He is an author! writer! and consultant in the motion picture! theater! and themed-entertainment industries. Nathan Greno arrived at Walt Disney Animation Studios in 1996 and has since served in a variety of capacities on the films Mulan! Brother Bear! Meet the Robinsons! and Bolt (head of story). He resides in Glendale! CA. Byron Howard joined Walt Disney Feature Animation in April 1994 and has worked on such films as Mulan! the animated short 'John Henry!' Lilo & Stitch! Brother Bear! and Bolt (co-director). Howard currently resides in Glendale! California. John Lasseter is a two-time Academy Award-winning director and the chief creative officer at Pixar and Walt Disney Animation Studios. Klappentext When it releases this fall, Tangled will be the 50th animated feature produced by Walt Disney Animated Studios. Featuring the stunning concept art behind the newest Disney masterpiece-from sketches and character designs to storyboards and color scripts - THE ART OF TANGLED also gives readers an inside look at the film's fascinating history, which began over sixty-five years ago with Walt Disney's early explorations in the fairy tale. Zusammenfassung Concept art from the forthcoming disney film! Rapunzel.