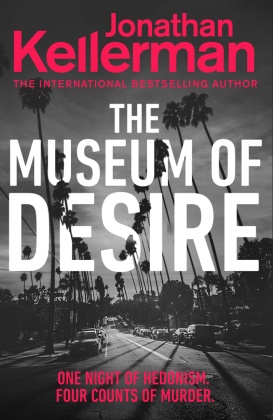 The Museum of Desire

A mansion in Beverly Hills is leased out to host an event wild enough to herald the end of days.

The next day there isn't a living soul to be seen.

But in the driveway sits a super-stretch limo, unlocked, with four bodies inside it. Nothing links the victims together. Each has been killed in a different way.

Now it's up to brilliant psychologist Alex Delware and LAPD Lieutenant Milo Sturgis to begin their grisliest and most baffling case yet.

As they struggle to make sense of the mass slaying, they will be forced to confront a level of evil that nothing can prepare them for.

He is also the author of two children's books and numerous nonfiction works, including Savage Spawn: Reflections on Violent Children and With Strings Attached: The Art and Beauty of Vintage Guitars. He has won the Goldwyn, Edgar, and Anthony awards and the Lifetime Achievement Award from the American Psychological Association, and has been nominated for a Shamus Award.

Jonathan and Faye Kellerman live in California and New Mexico.

A run-down mansion nestled between Beverley Hills and the San Fernando Valley is leased out for one night to house a party big enough to herald the end of days.

When a limo is discovered in the grounds of the house the morning after with four dead bodies inside, a mind-bending case begins.

With no link between the four people in the car, and each of the victims murdered in a different way, psychologist Alex Delaware and LAPD Lieutenant Milo Sturgis are about to begin their grisliest and most baffling case yet.

And as they struggle to make sense of the vicious mass slaying, they will be forced to confront a level of lust and evil for which their combined wisdom can provide no preparation.