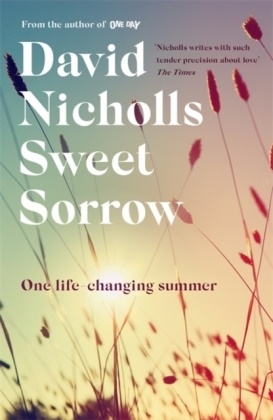 One life-changing summer Sixteen-year-old Charlie meets Fran... 8 million copies since STARTER FOR TEN first introduced us to his incomparable talent for making us laugh, cry and wince with recognition in the space of a single sentence; ten years after ONE DAY became the iconic love story for a generation; five years since the journey of US took him to the Man Booker Prize long-list; DAVID NICHOLLS has written a major new novel, SWEET SORROW : a hymn to the tragicomedy of ordinary lives, a celebration of the reviving power of friendship and that brief, blinding explosion of first love that perhaps can only be looked at directly once it has burned out. 'Nicholls writes with such tender precision about love' The Times 'There is a sharp empathetic intelligence to his writing that makes his characters real . . . the clear writing often dazzles with truth . . . sad funny, soulful' Observer 'A sublime talent for illuminating the murky causeway that most of us have to navigate between darkness and light' Donal Ryan 'Nicholls' ability to create and then subvert the traditional plot for comedy is the secret of his success. It makes us confront the gap between what we expect from storytelling and what happens in real life' Spectator

David Nicholls is the bestselling author of Us, One Day, The Understudy and Starter for Ten. His novels have sold over eight million copies worldwide and are published in forty languages.

David trained as an actor before making the switch to writing. He is an award-winning screenwriter, with TV credits including the third series of Cold Feet, a much-praised modern version of Much Ado About Nothing, The 7.39 and an adaptation of Tess of the D'Urbervilles. David wrote the screenplays for Great Expectations (2012) and Far from the Madding Crowd (2015, starring Carey Mulligan). He recently won a BAFTA for Patrick Melrose, his adaptation of the novels by Edward St Aubyn, which also won him an Emmy nomination.

His bestselling first novel, Starter for Ten, was selected for the Richard and Judy Book Club in 2004, and in 2006 David went on to write the screenplay of the film version.

His third novel, One Day, was published in 2009 to extraordinary critical acclaim, and stayed in the Sunday Times top ten bestseller list for ten weeks on publication. One Day won the 2010 Galaxy Book of the Year Award.

David's fourth novel, Us, was longlisted for the Man Booker Prize for Fiction 2014 and was another no. 1 Sunday Times bestseller. In the same year he was named Author of the Year at the National Book Awards.

'That most rare and coveted of literary feats: a popular novel of serious merit, a bestseller that will also endure.' Observer

'Triumph ... the sense of nostalgia is visceral and intense, almost time-bending.' The Sunday Times

'Pitch perfect ... Exquisite ... Terrific ... Very funny ... Though Sweet Sorrow is certainly pulse-quickening enough to absorb readers through this summer's airport delays and rained-off beach days, it's no escapist fantasy. The tale of Charlie and Fran will linger long beyond your tan.' Telegraph

In 1997, Charlie Lewis is the kind of boy you don't remember in the school photograph. His exams have not gone well. At home he is looking after his father, when surely it should be the other way round, and if he thinks about the future at all, it is with a kind of dread.

Then Fran Fisher bursts into his life and despite himself, Charlie begins to hope.

But if Charlie wants to be with Fran, he must take on a challenge that could lose him the respect of his friends and require him to become a different person. He must join the Company. And if the Company sounds like a cult, the truth is even more appalling.

The price of hope, it seems, is Shakespeare.

Poignant, funny, enchanting, devastating, Sweet Sorrow is a tragicomedy about the rocky path to adulthood and the confusion of family life, a celebration of the reviving power of friendship and that brief, searing explosion of first love that can only be looked at directly after it has burned out.

'A compassionate, intelligent look at the raw pain and loneliness of a teenage boy, the everyday miracle of first love and the perennial power of Shakespeare's language.' Spectator

'The author of Us and of course One Day has never written with more tenderness and insight than in this bittersweet story ... perfectly captures the dizzying highs and lows of first love.' Daily Express

'Such a beautiful book. Captures perfectly a moment in time we've all experienced.' Graham Norton