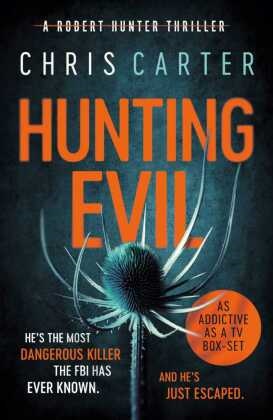 The compulsive new novel from the author of the Sunday Times Number One bestseller The Caller and Gallery of the Dead .
AS ADDICTIVE AS A TV BOXSET!

'Every story one day comes to an end.'
As roommates, they met for the first time in college. Two of the brightest minds ever to graduate from Stamford Psychology University.
As adversaries, they met again in Quantico, Virginia. Robert Hunter had become the head of the LAPD's Ultra Violent Crimes Unit. Lucien Folter had become the most prolific and dangerous serial killer the FBI had ever encountered.

Now, after spending three and a half years locked in solitary confinement, Lucien has finally managed to break free. And he's angry.

For the past three and a half years, Lucien has thought of nothing else but vengeance.
The person responsible for locking him away has to pay, he has to suffer.
That person ... is Robert Hunter.
And now it is finally time to execute the plan.

What the reviewers are saying about Chris Carter:

'Carter has a background in criminal psychology and the killers at the centre of his novels are all the more terrifying for it' Mail on Sunday, chosen for 'If You Only Pack One'
'Carter is one of those authors who makes writing look effortless ... I couldn't put it down' Crime Squad
'An insanely good crime series. Extraordinarily well written, high quality and high drama all the way' Liz Loves Books
'An intriguing and scary thriller' Better Reading
'A gripping feast of thrills' Shots
'A gripping psychological thriller' Breakaway
'This is a chilling, compulsive portrait of a psychopath, and proves that Carter is now in the Jeffery Deaver class' Daily Mail
'Punchy and fast paced' Sunday Mirror
'There's a touch of the Patricia Cornwell about Chris Carter's plotting' Mail on Sunday

Chris Carter received his undergraduate and master's degrees from the University of Oxford. He is the author of Science and Psychic Phenomena and Science and the Near-Death Experience. Originally from Canada, Carter currently teaches internationally.

As compelling as a TV box set - when will your Chris Carter addiction begin?