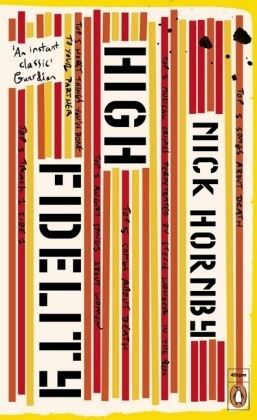 Nick Hornby's internationally bestselling first novel, available as a Penguin Essential for the first time. Do you know your desert-island, all-time, top five most memorable split-ups? Rob does. He keeps a list, in fact. But Laura isn't on it - even though she's just become his latest ex. He's got his life back, you see. He can just do what he wants when he wants: like listen to whatever music he likes, look up the girls that are on his list, and generally behave as if Laura never mattered. But Rob finds he can't move on. He's stuck in a really deep groove - and it's called Laura. Soon, he's asking himself some big questions: about love, about life - and about why we choose to share ours with the people we do. A million-copy bestseller, and adapted into a 2000 film starring John Cusack, High Fidelity explores the world of break-ups, make-ups and what it is to be in love. This astutely observed and wickedly funny book will be enjoyed by readers of David Nicholls and William Boyd, and by generations of readers to come. 'It will give enormous pleasure at the same time as expanding in a small but worthwhile way, the range of English literature' Independent on Sunday 'Leaves you believing not only in the redemptive power of music but above all the redemptive power of love. Funny and wise, sweet and true' Independent 'A triumphant first novel. True to life, very funny and moving' Financial Times

NICK HORNBY is the bestselling author of eight novels, including Just Like You, High Fidelity and About a Boy, and several works of nonfiction including Fever Pitch. He has also written numerous award-winning screenplays for film and television including Brooklyn, Wild and, most recently, State of the Union.