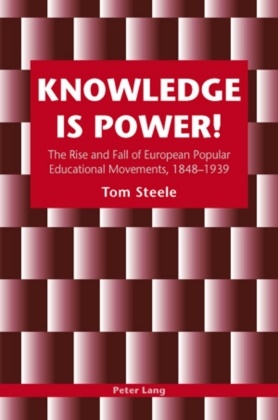 Knowledge is Power! - The Rise and Fall of European Popular Educational Movements, 1848-1939

This study is the first extensive attempt to chart the rise and fall of popular educational movements across Europe following the 1848 revolutions to their demise at the outbreak of World War Two. It examines in detail the relationships between the educational, political and social aspirations of the emergent nationalist, workers' and women's movements, and the challenge to traditional intellectuals and academic knowledge. Following the emergence of the bourgeois public sphere in the early modern period, popular educational movements were central to the pursuit of democratic civil societies and also fertile ground for innovatory subjects of knowledge and interdisciplinary study, which have frequently reshaped the academic curriculum. Radical forms flourished, ranging from civic educational leagues to folk high schools, workers' study circles, rationalist schools, Volksheims and university settlements that fed the demand for high-quality, socially relevant and politically charged education for adults. These stimulated radical social change, challenging the old empires and clerical domination. The study plots the cross-cultural influences at work and shows why some models were more palatable than others, drawing special attention to the rise of sociological positivism and anti-clericalism. It concludes by considering the contemporary global currents of renewal.

Contents: Popular Education and the Emergence of the Public Sphere - The Bourgeois Public Sphere: Science and the Citizen - Education from Below: the Emerging Plebeian and Proletarian Spheres - Nicolae Grundtvig and The Danish Folk High School Movement - Spain and Italy: Rationalist Education and Popular Universities - French Radical Freemasonry, Comtean Positivism and the Rise of the Universités Populaires - German and Austrian Popular Education: Science, Marxism and the Neue Richtung - The Nordic People's Enlightenment in Sweden, Finland and Norway - Belgium and Holland: Anglo-Saxon imperatives, the Rise and Fall of University Extension - Central and Eastern Europe: New Nations, New Humanity - Conclusion: The Fall and Rise of Popular Education Movements.