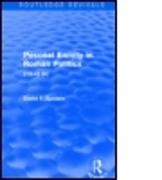 The Roman Republic was governed by a small group of men who agreed far more than they disagreed on the fundamental questions facing the state. The details of their public behaviour can thus only be understood in relation to the idiosyncrasies deeply embedded in Roman political culture, one of the most important of which was that of personal hatred – ‘inimicitia’.
Personal Enmity in Roman Politics, first published in 1987, explores how ‘inimicitia’ could arise and how it was often central in the formation of political factions. In particular, groups opposing such powerful figures as Pompey and Caesar might be united by nothing more than common hatred of the individual.
An important feature too was the criminal trial, because of the highly personal nature of the Roman adversary system at the time: Epstein argues that personal factors were more important than political ones in the famous trials of the late Republic.