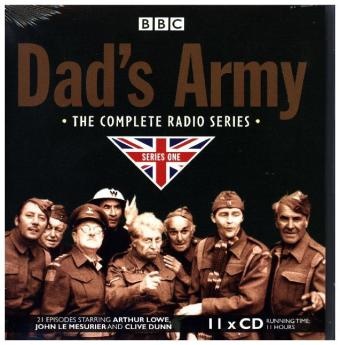 Twenty episodes from the first BBC Radio series plus an hour-long Christmas special, starring Arthur Lowe, John Le Mesurier and Clive Dunn.In 1973 the BBC adapted its hit TV series for radio, featuring the original TV cast and characters. Three series were broadcast between 1974 and 1976, with episodes adapted from their TV counterparts by Harold Snoad and Michael Knowles.Now you can enjoy once again these unique recordings, with a supporting cast including John Laurie, James Beck, Arnold Ridley and Ian Lavender. Among the twenty-one episodes are The Man and the Hour, The Battle of Godfrey's Cottage, Sgt Wilson's Little Secret, Something Nasty in the Vault, The Menace from the Deep and No Spring for Frazer.Also included is a sixteen-page PDF booklet with comprehensive programme history, synopses for all Series One episodes, original transmission dates, photographs and cast biographies.10 CDs. 10 hrs 10 mins.