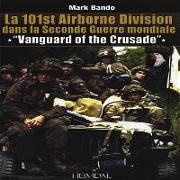 VANGUARD OF THE CRUSADE THE 101ST AIRBOR

Klappentext The 101st Airborne Division¿the Screaming Eagles¿is a U.S. Army modular light infantry division trained for air assault operations. During World War II! it was renowned for its role in Operation Overlord¿the D-Day landings starting 6 June 1944! in Normandy! France¿! Operation Market Garden! the liberation of the Netherlands and action during the Battle of the Bulge around the city of Bastogne! Belgium.The Pathfinders of the 101st Airborne Division led the way on D-Day in the night drop prior to the invasion. They left from RAF North Witham having trained there with the 82nd Airborne Division.The 101st Airborne Division's objectives were to secure the four causeway exits behind Utah Beach! destroy a German coastal artillery battery at Saint-Martin-de-Varreville! capture buildings nearby at M¿¿s believed used as barracks and a command post for the artillery battery! capture the Douve River lock at la Barquette (opposite Carentan)! capture two footbridges spanning the Douve at la Porte opposite Br¿nds! destroy the highway bridges over the Douve at Sainte-Come-du-Mont! and secure the Douve River valley.In the process units also disrupted German communications! established roadblocks to hamper the movement of German reinforcements! established a defensive line between the beachhead and Volognes! cleared the area of the drop zones to the unit boundary at Les Forges! and linked up with the 82nd Airborne Division.Mark Bando has dedicated this work to this famous American airborne division engaged in the Normandy and Ardennes battles. He relays in dramatic detail the histories recounted by hundreds of veterans! making this work a necessary addition to the enthusiast¿s library.