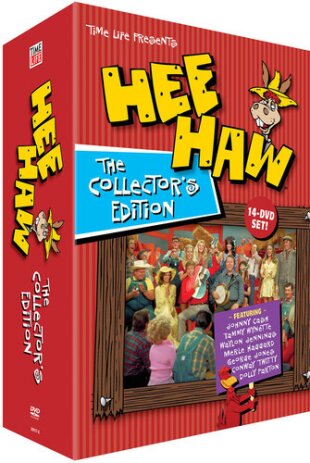 With a mix of down-to-earth and relatable characters, knee-slapping comedic zingers, and jaw-dropping musical performances, HEE HAW captivated large portions of the country when it first premiered on television in the late 1960s. One-liners flew. Stars like Johnny Cash and Dolly Parton performed. The show's co-hosts were Buck Owens and Roy Clark, and, on June 15th, 1969, the two musicians and songwriters, Buck and Roy, introduced a national audience to the fictional setting of Kornfield Kounty, a regular old place populated by hardworking farmers, barbers, banjo players, husbands, and housewives. After a two year run on CBS, Pfft HEE HAW was gone, getting picked up in syndication and airing until 1992, making it the "longest-running weekly syndicated original series in television history." This wonderful 14-DVD set contains some of the best sketches and brightest stars from that impressive 23-year history, all proof of the show's hard-earned and enormous success.