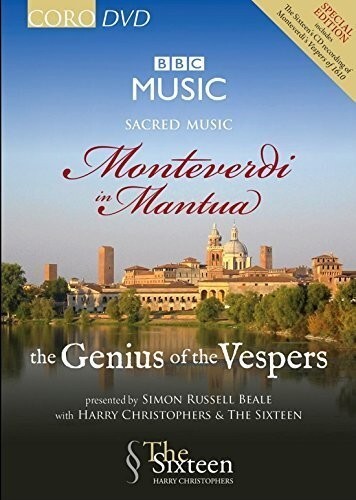 Monteverdi in Mantua - The Genius of the Vespers (2015) (Edizione Speciale, DVD + CD)

The BBC's celebrated Sacred Music journey continues with Monteverdi in Mantua - the story of a Renaissance duke and the composer who worked for him and how their volatile relationship would create one of the most revolutionary and beautiful collections of music ever published: The Monteverdi Vespers of 1610. The programme is presented by Shakespearean actor and former St Paul's Cathedral chorister, Simon Russell Beale, whose enthusiasm for choral music is matched by his gift for storytelling. Together with conductor Harry Christophers and his virtuoso choir The Sixteen, Simon explores Monteverdi's early career in Mantua, where he wrote the Vespers under the slave-like regime of Duke Vincenzo Gonzaga, a man addicted to sex, luxury and art. Using the remarkable legacy of 127 surviving letters, Monteverdi is revealed as the first of a new breed of dramatic composer, straddling the worlds of the secular and sacred, whose bold experiments would change the way music sounds forever.