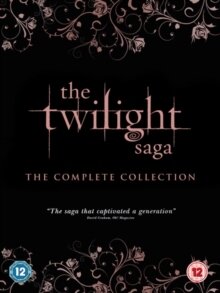 Bella Swan (Kristen Stewart) has always been a little bit different, never caring about fitting in with the trendy girls at her Phoenix high school. When her mother remarries and sends Bella to live with her father in the rainy little town of Forks, she doesn't expect much of anything to change. Then she meets the mysterious and dazzlingly beautiful Edward Cullen (Robert Pattinson), a boy unlike any she's ever met - intelligent and witty, he sees straight into her soul. But he has a dark secret: he's a vampire.

Bella is devastated by the abrupt departure of her vampire love, Edward, but her spirit is rekindled by her growing friendship with Jacob Black (Taylor Lautner). Suddenly she finds herself drawn into the world of werewolves, the ancestral enemies of the vampires, and finds her loyalties tested.

Bella is surrounded by danger as Seattle is ravaged by a string of mysterious killings and a malicious vampire continues her quest for revenge. In the midst of it all, she is forced to choose between her love for Edward and her friendship with Jacob knowing that her decision has the potential to ignite the ageless struggle between vampire and werewolf. With her graduation quickly approaching, Bella is confronted with the most important decision of her life.

Marriage, honeymoon and the birth of a child bring unforeseen and shocking developments for Bella, Edward and Jacob.

Transformed, Bella stands alongside Edward as a vampire. Experiencing phenomenal powers she thrives in her new life... but danger is never far away. Facing the wrath of the Volturi, led by the menacing Aro (Michael Sheen), can Edward, Bella and Jacob find the strength for one last stand to live the life they dream of?