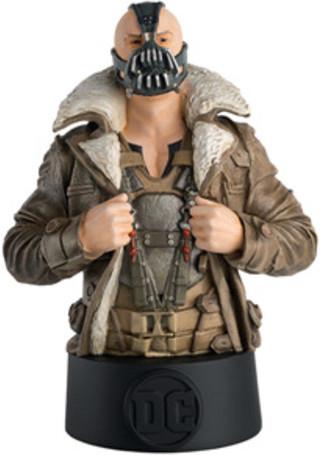 Bane served out his father's life sentence from childhood to early adult life in prison after his father escaped the corrupt court system of Santa Prisca. Imprisoned, he read as many books as he could get his hands on, spent most of his spare time body building in the prison's gym, developed his own form of meditation, and learned to fight in the merciless school of prison life. With a mix of brute strength and exceptional intelligence, Bane is often credited as being the only villain to have "broken the bat".The Bane Bust (The Dark Knight Rises) comes complete with a 16-page magazine packed with information about your bust, the character it represents, and over 75 years of DC comic book, TV, video game, and movie history. Product: Officially Licensed Bust/Figurine Collection: Batman Universe Collector's Bust, Material: Hand-Painted Metallic Resin, Height: Approx. 5.2 inchesScale: 1:16, Packaging: Boxed With Protective Blistering