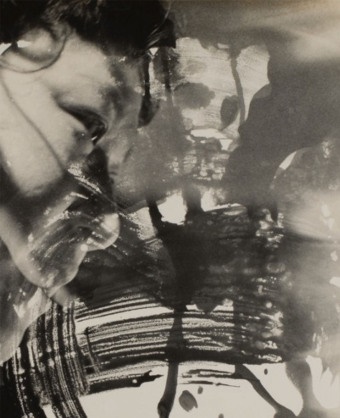 This book presents an overview of the avant-garde photographic oeuvre of Shigeru Onishi from the 1950s. Whether depicting nudes, cityscapes, trees or interiors (or combinations of these realized through multiple exposures or photomontages), most striking about Onishi's photos are his unorthodox printing methods: using a brush to coat the photographic paper with emulsion, fogging, discoloration with acetic acid, creating the effect that the fixing process was incomplete, and color correction by varying the temperature during development. The painterly results show Onishi's interest to be not conventional representation but, in his words, the visual "formation of ideas," and bringing out "the flavors of the image as they change" by embracing all aspects of chance involved in the photographic process. "In truth," he argues, "if your photograph consists only of planned elements, it is essentially identical to a drawing of a single equilateral triangle."

Onishi was furthermore a mathematician and this knowledge underpinned his approach: "To know the conditions of the object's formation-this is the purpose of my photography, which is founded on a desire to pursue metamathematic propositions such as 'the possibility of existence' and 'the possibility of optional choice.'"

By an artist largely unknown to the international public during his lifetime, Mathematical Structures, made in collaboration with MEM, Tokyo, is the first comprehensive book presenting Onishi's startingly original vision.

Shigeru Onishi (1928-94) was born into a long-established family in Takahashi, Okayama Prefecture. Already by middle school he was engrossed in the study of advanced mathematics while also experimenting with poetry. In 1953 Onishi graduated from Hokkaido University's Department of Mathematics and remained at the university to research topology. In Hokkaido he began to take photographs, from the beginning seeking to express internal images rather than represent the external world. His first solo exhibition was at Nabis Gallery, Tokyo, in 1955; in the late 1950s he gradually shifted his interest from photography to abstract ink painting, which French critic Michel Tapié introduced to the European public in the 1960s and '70s with the Gutai Group. Onishi's work is held in collections including the Museum of Modern Art, New York, Bombas Gens Centre d'Art, València, the National Museum of Modern Art, Kyoto, and the National Museum of Art, Osaka.

Manfred Heiting is a designer and editor of photo publications and a collector of photobooks focusing on the period between 1886 and 1980. He has designed and edited extensive surveys of German, Soviet, Japanese and Czech photobooks. Heiting is currently working on a bibliography of Dr. Paul Wolff and an overview of Dutch photobooks.

Ryuichi Kaneko is a leading historian of Japanese photobooks. As the former curator at the Tokyo Metropolitan Museum of Photography, he oversaw the development of the institution's collection. Over the past 45 years Kaneko has amassed a formidable private collection of more than 20,000 volumes, magazines and catalogues. As a scholar, he has been an important advocate in supporting the study of Japanese photography and photobooks.