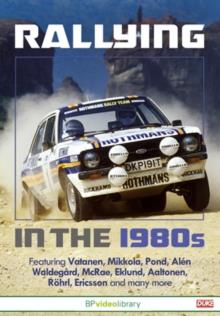 A series of four films featuring classic rally action from throughout the 1980s, packed with great driving names and iconic rally cars. The BP Video Library is a treasure trove of motorsport film, packed with rare gems showing the great names, great machines and great contests of years gone by. An extensive archive created on behalf of the oil giant, the Library includes the only surviving moving pictures of important motorsport events. For Rallying in the 1980s we have chosen four actionpacked programmes which show rallying in this decade was about more than just the Group B monsters. The action starts in Greece with the 1981 Acropolis Rally. Chariots in the Sun combines action, interviews and behind-thescenes access to create a truly evocative look back at this carbreaking event. Among the driving greats featured are Ari Vatanen, Markku alen, Hannu Mikkola, Malcolm Wilson and Michelle Mouton, while the four-wheel stars include the Ford Escort RS1800, Fiat 131 Abarth and all-new Audi Quattro, which leads the way until controversy intervenes. Next we head to South Africa for the 1981 Castrol Radio 5 International Rally, which sees World Rally stars including Tony Pond Jimmy McRae and Per Eklund take on heroes of the local scene, like Jochi Kleint and Sarel van der Merwe, in the demanding, hot and dusty conditions. Will the Datsun Stanza and Opel Ascona prove a match for the terrain? Rallymaster is a rally film classic, as Rauno Aaltonen delivers a master class in competing in a world-spec rally car. Basedaround Aaltonens battle with John Buffum in Canadas International Lobster Rally 1983, action footage and narration from the Flying Finn reveals the secrets of techniques including handbrake turns and safe jumping.