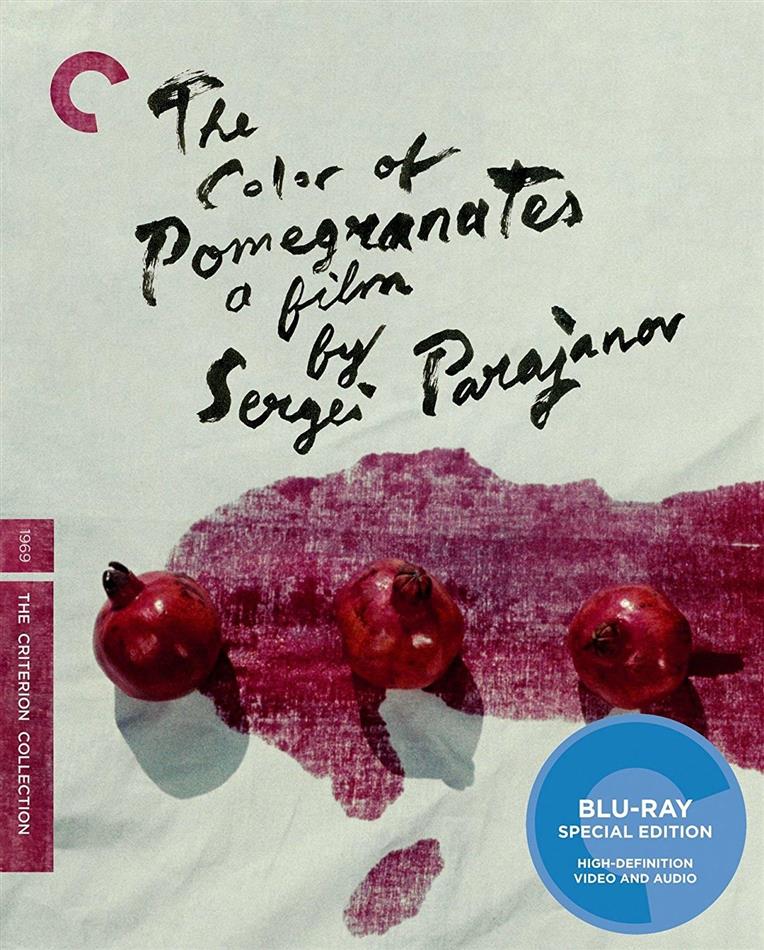 The Color Of Pomegranates (1969) (Criterion Collection)

the color of pomegranates
serjei paradjanov (1924-1990) has been acclaimed as the greatest russian filmmaker to appear since the golden age of eisenstein and dovzhenko. his baroque masterpiece, the color of pomegranates, was banned in russia for its redigious sentiment and nonconformity to "socialist realism"; its director, a tirelessly outspoken campaigner for human rights, was convicted on a number of trumped up charges and sentenced to five years of hard labor in the gulag. a wave of protest from the international film community led to his release in 1978.
aesthetically the most extreme film ever made in the ussr, pomegranates, his hallucinatory epic account of the life of the 18th century armenian national poet sayat nova, conveys the glory of what a cinema high art can be like. conceived as an extraordinarily complex series of painterly tableaux that recall byzantine mosaics, the film is a dreamlike icon come-to-life of astonishing beauty and rigor. it evokes the poet's childhood and youth, his days as a troubadour at the court of king heraclius 2 of georgia, his retreat to a monastery, his old age and death.
there has never been a film like this magical work. it fully justifies critic alexei korotyukov's remark: "paradjanov made films not about how things are, but how they would have been had he been god."

parajanov a requiem
an absorbing portrait of one of the most colorful and revered figures in world cinema, paradjanov: a requiem offers an affectionate and insightful look at the tumultuous career of the late sergei paradjanov - artist, dissident, romantic and iconoclast.
from his early years as a protege of silent film legends dovzhenko and eisenstein, paradjanov charts the evolution of the controversial director's artistry, which culminated in the creation of brillant, hallucinatory film fantasies of ukrainian poetry and folk legends. rather than being celebrated for this mesmerizing work, the armenian director was branded a "surrealist" by soviet authorities and imprisoned for his artistic and intellectual challenges to the reigning dogma of socialist realism.
rare, extensive interviews with the outspoken director are laced with clips from paradjanov's filmic seductions of the eye and imagination, including ashik kerib, (the legend of suam fortress, shadows of forgotten ancestors). scenes from the director's earlier films, unavailable in the west (such as andriesh, the first lad, ukrainian rhapsody), can be seen for the first time. drawing, photgraphs and fragments of uncompleted film coalesce to make paradjanov: a requiem a revealing account of an unforgettable artist.