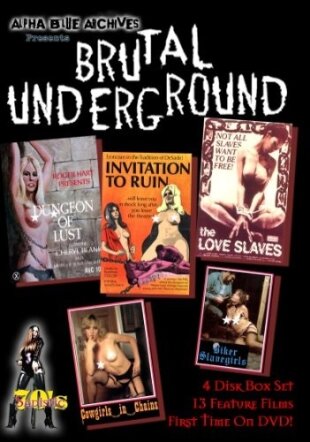 FULL LENGTH FEATURE FILMS INCLUDE:
INVITATION TO RUIN
1968/1973. 82m. Dir: Bob Cresse.
XXX Version. A sleazy prowler lures young innocents to the dungeon of a fat white slaver. The mute obese sadist Mama Lupo then trains them through brainwashing by bondage, whipping, lesbian sex and needles full of heroin. The sex drones finally get their revenge in violent roughie fashion.
VICIOUS VIRGIN
A bratty but busty little teen's father leaves her in the clutches of a brutal dominatrix. Rape by dildos and cocks and repeated beating is the only way she will learn to obey.
KINKY PERVERSION
Peak into the sex lives of dominants, fetishists, and adorable bald beavered girls.
PIT OF PERVERSION
Adam Ward, Sandy Carey.
Undercover cops train women to be total slave sluts and force a peace loving hippy to manhandle a bound captive.
BIKER SLAVEGIRLS
A scummy biker picks up a well used tramp by offering her cocaine. He whips, fucks and abuses her shaking body while she comes again and again.
CULT OF THE SCORPION
A box of sex toys leads a young girl to a sex cult who may have had something to do with her sister's disappearance.
COWGIRLS IN CHAINS
Multiple men share submissive women; A young tramp masturbates her asshole on the back of a donkey and invites two guys to join in, and a guy gives his buddy a bondage lesson that their soft skinned captive will never forget.
NICOLE, THE STORY OF O
Suzanne Fields.
Takes the 'Story of O' to another level, where piercing, beating, severe discipline and even death are all part of being the perfect slave.
DUNGEON OF LUST
Annete Haven.
A slutty model is kidnapped and enjoys lesbianism with her captive companion. Features some outstandingly attractive females!
SECRET DESIRE
A rampaging father ties his own daughter in the attic and attacks her mercilessly. Her friends search for her, but one by one they too are strung up and forced to endure daddy's cock.
WHITE SLAVERS
A big titted blonde dominant runs a slave ship where she bullwhips her young abductees asses before sucking on their sweet cunts.
LOVE SLAVES
1976. 88m. Sharon Thorpe, Patricia Lee. Dir: Bob Cresse.
A drug ring shoots up women with heroin, hypnotizes them, and turns them into sex slave assassins. The raunchy loop style hardcore is spiced with rope bondage, catfights, close up syringe injections, and mannequin fucking.
THE CHATEAU AKA CHATEAU OF DISCIPLINE
Sandy Carey, Suzanne Fields.
German slavers, led by adorable sex goddess Suzanne Fields, capture and torture beautiful women. Suzanne pleases herself by spying through hidden cameras as they are whipped and beaten by masked men.
+ BONUS ORIGINAL THEATRICAL TRAILERS.
Sprachen: Englisch