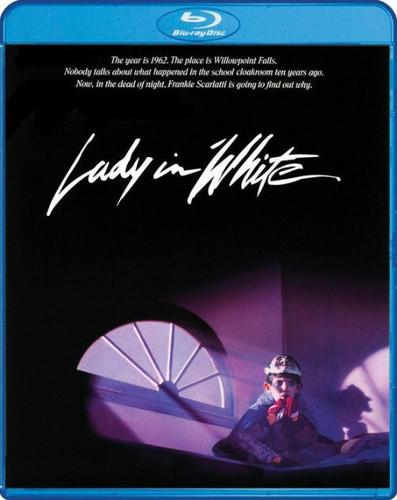 In this supernatural nostalgia piece, a young boy tracks down a murderer with help from the ghosts of a slain little girl and her mother. In a voice-over, grown-up writer Frankie Scarlatti describes the disturbing events that intruded on his idyllic small-town boyhood. Locked in the school cloakroom by some other boys on Halloween 1962, young Frankie (Lukas Haas) encounters the ghost of Melissa Anne Montgomery (Joelle Jacobi), who re-enacts her own death by strangulation just before an unseen adult enters the school and tries to do away with Frankie himself. While recuperating in the care of his widower father (Alex Rocco), Frankie conducts some detective work and learns that Melissa is one of ten children killed over the past decade. Further encounters with the girl's ghost - and the mournful specter of her mother, the Lady in White (Karen Powell) - do little to help the boy solve the mystery of who killed the kids. Meanwhile, an innocent black maintenance man becomes the scapegoat on which the police hang the killings. However, thanks to the damning but enigmatic evidence Frankie has discovered, the boy faces imminent danger from the actual killer, who ends up lurking terrifyingly close to home. The sophomore feature from writer/director Frank LaLoggia, who made his name with the low-budget horror film Fear No Evil, Lady in White starred the young Lukas Haas halfway between his appearances in Witness and Rambling Rose.