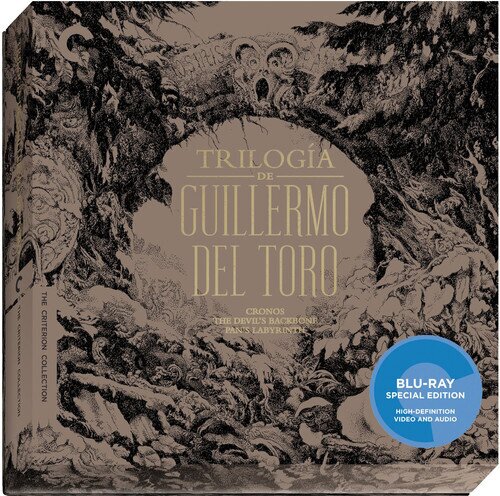 Throughout a career that encompasses both visually arresting art-house hits and big-budget Hollywood spectacles, director Guillermo del Toro has continually redefined and elevated the horror genre with his deeply personal explorations of myths and monsters. These three Spanish-language films, each a tale of childhood in troubled times, showcase his singular fusion of the fantastic and the real. Drawing inspiration from a rich variety of sources, from Alfred Hitchcock to Francisco de Goya, the gothic-infused stories collected here populated by vampires, ghosts, and a fairy-tale princess make evident why del Toro is considered the master cinematic fabulist of our time.

Cronos:
A mysterious device designed to provide its owner with eternal life resurfaces after four hundred years, leaving a trail of destruction in its path.

The Devil's Backbone:
After Carlos, a 12-year-old whose father has died in the Spanish Civil War, arrives at an ominous boy's orphanage he discovers the school is haunted and has many dark secrets that he must uncover.

Pan's Labyrinth:
In the falangist Spain of 1944, the bookish young stepdaughter of a sadistic army officer escapes into an eerie but captivating fantasy world.