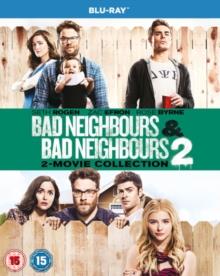 By all appearances, new parents Mac (Seth Rogen) and Kelly Radner (Rose Byrne) are living the American dream - complete with an adorable baby girl and a beautiful new started home in the suburbs. Still, the early-thirty somethings want to believe that they have a modicum of coolness left within them. So when they discover that their new next-door neighbors are none other than dozens of Delta Psi Beta fraternity brothers led by charismatic president Teddy Sanders (Zac Efron), they try to play along and make best of an awkward situation. But when the frat's parties grow increasingly more epic, both side of the property line begin to fend for their turf. The neighbors' relentless sabotage escalates into outrageous one-upmanship, beginning an epic Greek war for the ages. Also stars Dave Franco and Christopher Mintz-Plasse.

Now that Mac (Seth Rogen) and Kelly Radner (Rose Byrne) have a second baby on the way, they are ready to make the final move into adulthood: the suburbs. But just as they thought they'd reclaimed the neighborhood and were safe to sell, they learn that the new occupants next door are a hard-partying, out-of-control sorority, led by Shelby (Chloe Grace Moretz). Mac and Kelly are made to team up with their charismatic ex-neighbor and now secret weapon, Teddy (Zac Efron), since the ladies of Kappa Nu aren't going down without a fight.