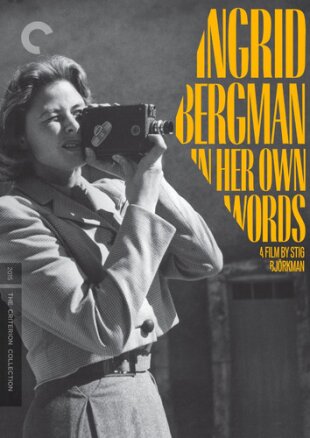 Ingrid Bergman - In Her Own Words (2015) (Criterion Collection)

Whether headlining films in Sweden, Italy, or Hollywood, Ingrid Bergman always pierced the screen with a singular soulfulness. With this new documentary, made on the occasion of the one hundredth anniversary of Bergman’s birth, director Stig Björkman allows us unprecedented access to her world, culling from the most personal of archival materials—letters, diary entries, photographs, and 8 mm and 16 mm footage Bergman herself shot—and following her from youth to tumultuous married life and motherhood. Intimate and artful, this lovingly assembled portrait, narrated by actor Alicia Vikander, provides luminous insight into the life and career of an undiminished legend.

- New interview with Björkman
- Selection of 8 mm home movies shot by Bergman in the 1930s
- Two deleted scenes, showing Bergman’s daughters reading an essay she wrote at age seventeen and an interview with film historian and Bergman scholar Rosario Tronnolone
- Extended versions of scenes featuring interviews with actors Sigourney Weaver and Liv Ullmann and Bergman’s daughter Isabella Rossellini and with the three Rossellini siblings
- Clip from the 1932 film Landskamp, featuring Bergman in her first screen role
- Outtakes from Bergman’s 1936 film On the Sunny Side
- Music video for Eva Dahlgren’s song “The Movie About Us,” which is included on the film’s soundtrack
- Trailer
- New English subtitle translation
- Plus: An essay by film scholar Jeanine Basinger