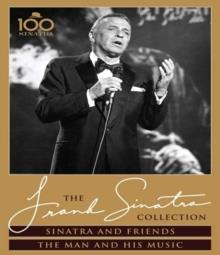 Sinatra and Friends / The Man and His Music (Sinatra 100, The Frank Sinatra Collection )

Sinatra and Friends is a television special that aired on April 21, 1977. In this scintillating show, the inimitable Frank Sinatra swings through the hits and lesser-known gems with superstar friends John Denver and Natalie Cole, as well as Dean Martin, Tony Bennett, Loretta Lynn, Leslie Uggams and Robert Merrill, for a unique set of timeless duets. Sinatra and Friends is a one-of-a-kind collection of classic songs as you've never heard them before, all backed by a fantastic orchestra led by one of greatest arrangers in the history of popular music, Nelson Riddle.

Though it was taped 16 years after the first 'A Man And His Music' special, this final installment from 1981 continues to uphold the high standards of the series, thanks in no small part to the accompaniment of the legendary Count Basie and his orchestra. Performances include Pennies From Heaven, Something, The Best Is Yet To Come and Theme From New York, New York.