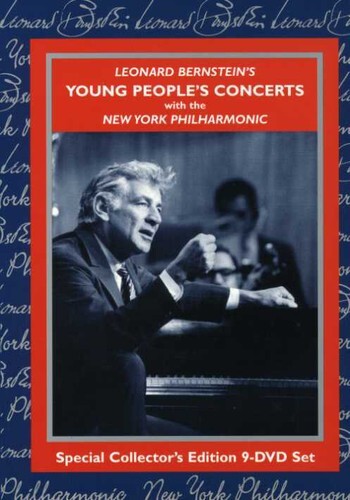 From 1958 through 1973, renowned conductor and composer Leonard Bernstein and the New York Philharmonic Orchestra thrilled audience with wonderful concert experiences presented in a sparkling music-with-commentary format: the Young People's Concerts.

Viewed nationwide on CBS television, and eventually telecast around the world, the Young People's Concerts turned an entire generation into music lovers.

Broadcast to millions in America and abroad, the immensely popular series was the winner of multiple Emmy, Peabody, and Edison awards. Now this national treasure is available for the first time on a DVD in a Special Collector's Edition 9-disc set that contains 25 programs from the Young People's Concerts series.

- What Does Music Mean?
- What is American Music?
- What is Orchestration?
- What Makes Music Symphonic?
- What is Classical Music?
- Humor in Music
- What is a Concerto?
- Who is Gustav Mahler?
- Folk Music in Concert Hall
- What is impressionism?
- Happy Birthday, Igor Stravinsky
- What is a Melody?
- The Latin American Sprit
- Jazz in the Concert Hall
- What is Sonata Form?
- A Tribute to Sibelius
- Musical Atoms: A Study of Intervals
- The Sound of an Orchestra
- A Birthday Tribute to Shostakovich
- What is a Mode?
- A Toast to Vienna in 3/4 Time
- Quiz-Concert: How Musical Are You?
- Berlioz Takes A Trip
- Two Ballet Birds
- Fidelio: A Celebration of Life