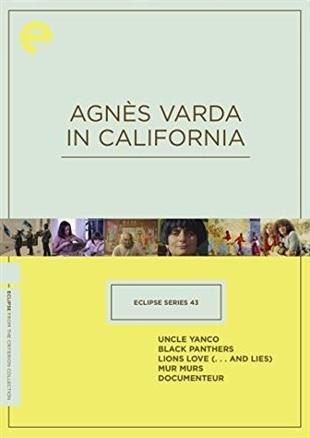 The legendary French filmmaker Agnès Varda, whose remarkable career began in the 1950s and has continued into the twenty-first century, produced some of her most provocative works in the United States. After temporarily relocating to California in the late sixties with her husband, Jacques Demy, Varda, inspired by the politics, youth culture, and sunshine of the San Francisco and Los Angeles areas, created three works that use documentary and fiction in various ways. She returned a decade later, and made two other fascinating portraits of outsiderness. Her five revealing, entertaining California films, encompassing shorts and features, are collected in this set, which demonstrates that Varda was as deft an artist in unfamiliar terrain as she was on her own turf.

Agnès Varda's first California films were two short documentaries made in the San Francisco Bay Area, one personal, the other political. In Uncle Yanco, Varda tracks down a Greek emigrant relative she's never met in Sausalito. In Black Panthers, she turns her camera on an Oakland demonstration protesting the imprisonment of activist and Black Panthers cofounder Huey P. Newton. These films chart a course from the delightful to the urgent, each in it's own way revealing Varda's curious, empathetic nature.

Agnès Varda goes to Los Angeles, taking New York counterculture with her. In a rented house in the sun-soaked Hollywood hills, a woman and two men-Viva, of Warhol Factory fame, and James Rado and Gerome Ragni, who created and starred in the rock musical Hair-delight in each others' bodies while musing on love, stardom, and politics. They are soon joined by underground director Shirley Clarke, playing herself as well as functioning as a surrogate for Varda. Lions Love (... and Lies) is a metacinematic inquiry into the alternating currents of whimsy and tragedy that typified late sixties America.

After returning to Los Angeles from France in 1979, Agnès Varda created two films, different in form and tone yet complexly interwoven. Mur Murs is a kaleidoscopic documentary about the striking murals that decorate the city; Documenteur is a small-scale fiction about a divorced mother and her child (played by Varda's own son) living a quiet existence on L.A.'s margins. Taken together, these films, with their overlapping images and ideas, sketch a portrait of a metropolis at once sprawling and isolating, bursting with life and haunted by loneliness.