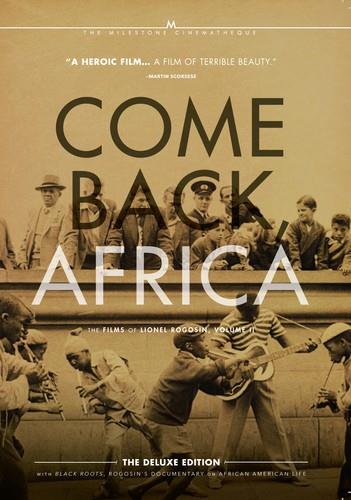 - Come Back, Africa
Lionel Rogosin`s religion could be dubbed "liberation cinematography" - he made films as a way to fight injustice. In 1957, Rogosin followed his calling to South Africa creating Come Back, Africa - a powerful and moving drama exposing the harsh reality of life under the system of aprtheid. Shooting secretly under the very noses of the feared South African police, Rogosin, his crew and his cast (including journalists/activists Lewis Nkosi, Bloke Modisane, and Can Themba) risked arrest and deportation. Miriam Makeba, whose electrifying appearance in Come Back, Africa launched a legendary career, found herself banned from her country after she traveled to Venice for the movie`s premiere. The scenes shot in the vibrant black ghetto of Sophiatown are precious images of a lost world. Nkosi later said of the film, "It is a monument...We were able to show the world what South Africa really was like."