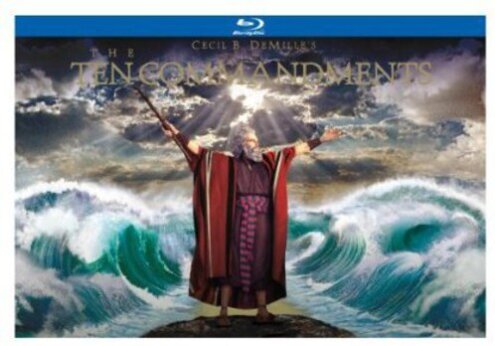 Cecil B. DeMille's final film was this grand-scale religious epic starring Charlton Heston as Moses, an adopted Egyptian prince chosen by God to abandon a life of luxury and lead his fellow Israelites out of slavery. The flight from Egypt, the parting of the Red Sea, and Moses' receiving of the Commandments are among this classic film's many highlights.

For sheer pageantry and spectacle, few motion pictures can claim to equal the splendor of Cecil B. DeMille`s 1956 remake of his epic The Ten Commandments. Filmed in Egypt and the Sinai with one of the biggest sets ever constructed for a motion picture, this version tells the story of the life of Moses (Charlton Heston), once favored in the Pharaoh`s (Yul Brynner) household, who turned his back on a privileged life to lead his people to freedom. With a rare on-screen introduction by Cecil B. DeMille himself.