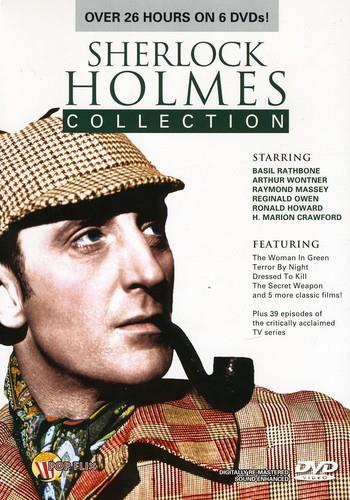 - The Woman In Green
Starring: Basil Rathbone, Nigel Bruce
A series of killings labeled the "finger murders" crop up in London. The victims are all beautiful women, each with her right forefinger chopped off! A trail of evidence leads Holmes (Rathbone) to his recurrent nemesis, Professor Moriarty, and the occult world of hypnosis.

- Terror By Night
Starring: Basil Rathbone, Nigel Bruce
Terror haunts a train ride from London to Edinburgh. Holmes and Watson are on board, guarding the delivery of a precious diamond known as the "Star of Rhodesia". Trouble ensues when someone is murdered and the diamond is stolen.

- Dressed to Kill
Starring: Basil Rathbone, Nigel Bruce
Several individuals at a London auction purchase a number of harmless-looking music boxes. Little do they know that these boxes hold the secret code to a hidden booty. As each owner gets murdered, Holmes begins to piece together the motivation behind these heinous crimes.

- Sherlock Holmes & The Secret Weapon
Starring: Basil Rathbone, Nigel Bruce
The evil Professor Moriarty kidnaps a Swiss scientist developing a secret formula vital to the outcome of World War II. Holmes and Watson must rescue the scientist before he falls into the hands of Hitler.

- Triumph of Sherlock Holmes
Starring: Arthur Wontner, Ian Fleming
Holmes (Wonter) and Watson receive a cryptic note, white draws them out of their "official" retirement. They become entangled in a complex murder mystery involving an ex-member of the Scowlers, an American secret society of murderous coal miners.

- Murder At The Baskervilles
Starring: Arthur Wontner, Ian Fleming
Holmes and Watson are invited by their old friend Sir Baskerville to stay at his estate. Shortly after his arrival, Holmes is asked to help solve the mysterious disappearance of a prize racing horse. Holmes suspects that his archenemy Professor Moriarty is involved.

- The Sign Of Four
Starring: Arthur Wontner, Ian Hunter
An escaped killer is out to retrieve a treasure cheated from him long ago and will let nothing stand in his way. An innocent woman hold part of the treasure: a band of pearl. Threatened by the killer, she runs to Sherlock Holmes for help.

- The Speckled Band
Starring: Raymond Massey, Lynn Harding
A young heiress seeks the help of Holmes (Massey) and Watson after her sister dies under mysterious circumstances. When the duo visit her brooding estate and find the girl's bed bolted to the floor they fear she's headed for the same fate.

- A Study in Scarlet
Starring: Reginald Own, Warburton Gamble
Members of a band of jewel thieves known as the Scarlet Ring are being murdered one by one and their deaths announced by a nursery rhyme. A young window of one of the murdered crooks calls upon Holmes (Owen) and Watson to unravel the mystery.

- The Complete Sherlock Holmes TV Series
39 Episodes of muster and intrigue! Starring Ronald Howard as the world famous sleuth and H. Marion Crawford as the unflappable Dr. Watson, this critically acclaimed series is hailed as the most faithfully filmed adaptation of Sir Arthur Conan Doyle's legendary characters. A must have for every avid Sherlock Holmes fan!