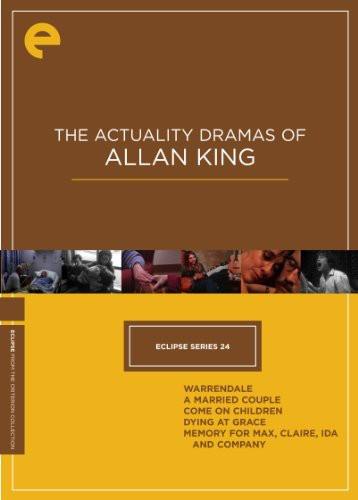 Canadian director Allan King is one of cinema's best-kept secrets. Over the course of fifty years, King shuttled between features and shorts, big-screen cinema and episodic television, comedy and drama, fiction and nonfiction. Within this remarkably varied career, it was with his cinema-verite-style documentaries - his "actuality dramas," as he called them - that he left his greatest mark on film history. These startlingly intimate studies of lives in flux - emotionally troubled children, warring spouses, and the terminally ill - are riveting, at times emotionally overwhelming, and always depicted without narration or interviews. Humane, cathartic, and important, Allan King's spontaneous portraits of the everyday demand to be seen.

Warrendale
For his enthralling first feature, Allan King brought his cameras to a home for psychologically disturbed young people. Situated inside the facility like flies on the wall, we get full access to the wide spectrum of emotions displayed by twelve fascinating children and the caregivers trying to nurture and guide them. The stunning Warrendale won the Prix d'art et d'essai at Cannes and a special documentary award from the National Society of Film Critics.

A Married Couple
Billy and Antoinette Edwards let it all hang out for Allan King and crew in this jaw-dropping documentary of a marriage gone haywire that "makes John Cassavetes's Faces look like early Doris Day" (Time). Intense and hectic, frightening and funny, A Married Couple is ultimately about the eternal power struggle in romantic relationships, as well as entrenched gender roles on the cusp of change.

Come On Children
In the early 1970s, ten teenagers (five boys and five girls) leave behind parents, school, and all other authority figures to live on a farm for ten weeks. What emerges in front of Allan King's cameras is the fears, hopes, and alienation of a disillusioned generation. Come On Children is a swiftly paced, vivid rendering of one of the twentieth century's most remarkable - and ultimately directionless - countercultures.

Dying At Grace
An extraordinary, transformative experience, Allan King's Dying At Grace is quite simply unprecedented: five terminally ill cancer patients allowed the director access to their final months and days inside the Toronto Grace Health Care Center. The result is an unflinching, enormously empathetic contemplation of death, featuring a handful of the most memorable people ever captured on film.

Memory For Max, Claire, Ida And Company
Allan King brings us close to the people who reside and work in a home for geriatric care in this beautifully conceived, powerful documentary. For four months, King follows the daily routines of eight patients suffering from dementia and memory loss; the result is searing, compassionate drama that can bring to the viewer a greater understanding of his or her loved ones.