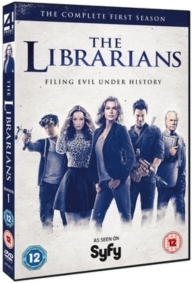 Flynn Carsen may appear to be an ordinary librarian working at the world-famous Metropolitan Library, but beneath the public library lies the centuries-old headquarters of scholars and adventurers who investigate the bizarre, collect dangerous artifacts and save the world from supernatural threats. This is THE LIBRARY, and Flynn is THE LIBRARIAN.

When an ancient conspiracy threatens to destroy technology and bring back the age of magic, Flynn and his new Guardian, Eve Baird, must recruit three extraordinary people - a secretive scholar/cowboy who works on an oil pipeline, a hospital attendant who has the extraordinary gift of synesthesia the ability to link all five senses to her memory, and a world-class thief to join in the quest. If these new recruits fail, the world will be plunged into a new Dark Age. But if they succeed (and survive), they will become the new LIBRARIANS.