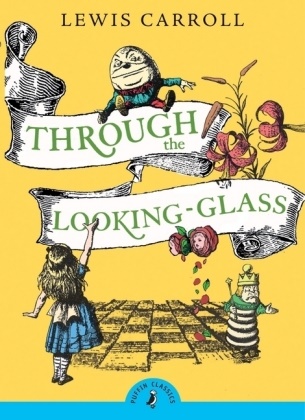 Trough the Looking Glass and What Alice Found There

Informationen zum Autor Lewis Carroll (Author) Lewis Carroll, born Charles Lutwidge Dodgson (1832-98), grew up in Cheshire in the village of Daresbury, the son of a parish priest. He was a brilliant mathematician, a skilled photographer and a meticulous letter and diary writer. Alice's Adventures in Wonderland, inspired by Alice Liddell, the daughter of the Dean of Christ Church in Oxford, was published in 1865, followed by Through the Looking-Glass in 1871. He wrote numerous stories and poems for children including the nonsense poem The Hunting of the Snark and fairy stories Sylvie and Bruno. Chris Riddell (Introducer) Chris Riddell, the 2015-2017 Uk Children's Laureate, is an acclaimed artist of children's books and a political cartoonist for the Observer. Amongst other titles, Chris illustrates the Ottoline young fiction series and the Goth Girl series, as well as working closely with Paul Stewart on the Edge Chronicles and Wyrmeweald . He has won many awards for his work, including the Nestlé Gold Award, the Costa Children's Book Award 2013, the UNESCO Award for Something Else and the rare honour of two Kate Greenaway Medals. Klappentext This edition of Carroll's classic fantastical adventure includes an Introduction by Chris Riddell, the co-creator of the bestselling Edge Chronicles. Reissue. Zusammenfassung When Alice steps through the looking-glass, she enters a very strange world of chess pieces and nursery rhyme characters such as Humpty Dumpty, Tweedledum and Tweedledee and the angry Red Queen. Nothing is what it seems and, in fact, through the looking-glass, everything is distorted.