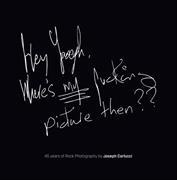 A genuine, precious collector's item that belongs in the collection of every rock fan and music lover!
45 years of rock history are photographically documented by one of the most passionate photographers. Joseph Carlucci is the official photographer of numerous festivals, has illustrated countless press articles and immortalised an infinite number of rock stars on their publications with his outstanding photographs. His unique photos are known by rock fans and artists all over the world. His book covers 45 years of rock history on 276 pages, printed in LP-format in high-quality.
The strong visual impressions of the pictures are complemented by comments, memories and anecdotes from Joseph Carlucci, legendary musicians, renowned music journalists and key people from the music business who lived and were part of the spirit of rock.
Joseph Carlucci has chosen a dedication signed by David Bowie as the title for his book. Because the title is both an answer as well as a consolation for all those artists who don't find their photo in the book. It was hard to make a selection from a bulging archive of truly exciting pictures, covering rock history over 45 years. Joseph has chosen his most personal and important shots, regardless of the artist’s fame or commercial considerations. It was a long, sometimes painful process. Joseph decided to focus on his great first love: rock.
You will recognise the heroes of generations on about 300 photos, from the Rolling Stones, Kiss, Nirvana, Led Zeppelin, Queen, AC/DC, Metallica, George Benson, Santana, to name but a few.
2020/21, more than fifteen months without concerts ! A long, dry spell for concert affinados, artists, promotors, live photographers and anyone who works with live music. At the same time the chance for Joseph Carlucci to work on this extraordinary book. The opportunity to take time and do what he loves best: telling stories with his photos and sharing his unconditional passion for music by releasing his most magic shots and memories.

Joseph Carlucci was born on January 28, 1956 in Nociglia, Italy. When he was ten, he moved to Lausanne, Switzerland, where his career as live photographer began.

He discovered his passion for music and live performances at an early age. But it was 1974 in Bern when Joseph Carlucci experienced his first rock concert: Uriah Heep lit his inner fire for the power and energy of rock music on stage. This fire is burning to this day! Living at Lake Geneva, very close to Montreux and the world-famous Montreux Jazz Festival offered him great opportunities. The next step was obvious: his first visit to the Montreux Festival took place 1975. It brought artists from all over the world in front of his lens. A paradise for the young photographer! Finally he could live his passion to the full. From that moment on, Joseph was constantly on the hunt for unique, historic, legendary moments that he could immortalise and share with his friends and the world. His enormous natural talent for capturing the most extraordinary and impressive moments in a fraction of a second, even under the most difficult circumstances, made him one of the most recognized rock photographers.

Rock acts and their immense energy have always fascinated him. Which is mutual. Rock stars like AC/DC, Metallica, ZZ Top, Deep Purple, Santana, to name but a few, work with Joseph Carlucci, appreciating his sensitive, intuitive and impressive pictures