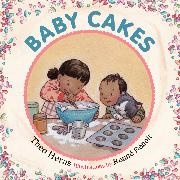 A sweet, everyday adventure in a sturdy board book format that will inspire wee ones to enjoy the magic of baking themselves

Theo Heras is a performer, speaker, book reviewer, and a children’s librarian. Passionate about literature and programming for babies and toddlers, Theo published the picture book Hat On, Hat Off in 2016 to wide critical acclaim. She has also recorded two albums: What Will We Do with the Baby-o?, and Seashell, Sing a Song to Me. Theo lives in Toronto, Ontario.Renné Benoit is living her childhood dream of being an artist. Trained in graphic design, she is the award-winning illustrator of more than 15 books for children. Her awards include the Ruth and Sylvia Schwartz Award for Children’s Literature for Proud as a Peacock, Brave as a Lion; the OLA Silver Birch Express Award for The Secret of the Village Fool; and the Christie Harris Illustrated Children’s Literature Prize for both Fraser Bear and Goodbye to Griffith Street. The latter was also nominated for the Amelia Frances Howard Gibbon Award. Big City Bees was nominated for the Governor General’s Literary Award for Children’s Illustration. Renné lives in St. Thomas, Ontario.