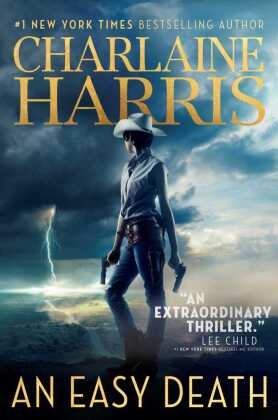 Zusatztext "This looks like another winning series from a sure-bet author." Informationen zum Autor Charlaine Harris is a  New York Times  bestselling author who has been writing for over thirty years. She was born and raised in the Mississippi River Delta area. She has written four series, and two stand-alone novels, in addition to numerous short stories, novellas, and graphic novels (cowritten with Christopher Golden). Her Sookie Stackhouse books have appeared in twenty-five different languages and on many bestseller lists. They’re also the basis of the HBO series  True Blood.  Harris now lives in Texas, and when she is not writing her own books, she reads omnivorously. Her house is full of rescue dogs. Klappentext New York Times bestseller Charlaine Harris (Sookie Stackhouse mysteries! True Blood! Midnight Crossing) delivers the first thriller in a new trilogy that presents a chilling alternate history of the United States where everyone believes in magic - but no one is sure whether they can trust it. An Easy Death CHAPTER ONE In the morning I got Chrissie to cut off all my hair. Tarken and Martin would be tinkering with the truck, which was our livelihood. Galilee would be watching Martin, because they had started seeing each other before and after work. Or she would be cleaning her little house, or washing her clothes. I never saw Galilee bored or idle. But I didn’t have to be at Martin’s until late that afternoon, so I was doing whatever I pleased. That morning I was pleased to get rid of my hair. My neighbor Chrissie was not too bright, but I’d watched her trim her husband’s hair and beard as he sat on a stool outside their cabin. She’d done a good job. She sang as she worked, in her sweet, high voice, and she told me about her youngest one’s adventures with a frog in the creek. When she was halfway done, she said, “Why you want to cut all this off? It’s so pretty.” “It gets all sweaty and sticks to my neck,” I said. Which was true. It was only spring now, but it would be the hot season soon. “You better wear you a hat so your head won’t get all red and tender,” Chrissie said. “You want it so short I think the sun might get your scalp.” “I’ll take care,” I said, holding up the only little mirror Chrissie had. I could see part of my head at a time. She’d washed it, so my hair was wet. I thought it was about an inch long. Looked like the curl was gone, but I wouldn’t know until it dried. “You heading out soon? I saw them farmers at Martin’s place, when I was coming back from the store.” Chrissie’s trousers had long tendrils of dark hair all over ’em now. She’d have to brush ’em. “Yeah, we’re leaving as soon as it’s near dark.” “Ain’t you scared?” Sure, I was. “Of course not, the only ones should be scared are anyone who tries to get in our way.” I smiled. “You’ll kill ’em dead, bang, bang,” Chrissie said in a singsong voice. “Yep. Bang, bang,” I agreed. “Why are they going to New America?” “The farmers? The part of Texas they live in got swallowed up by Mexico a few years ago. You remember?” Chrissie looked dim. She shook her head. “Anyway, the government down there has been telling the Texans that they’re not real Mexicans, and their land is forfeit.” Chrissie looked even dimmer. “Their land is getting taken. So if they’ve got kin up north or anywhere, even in Dixie, they got to leave Mexico to have a chance.” Dixie was so poor and so dangerous you’d have to be desperate to flee there. Chrissie ran her fingers through the short hair on the left side of my head, and shook her head. “Anyone ever go to the HRE?” ...