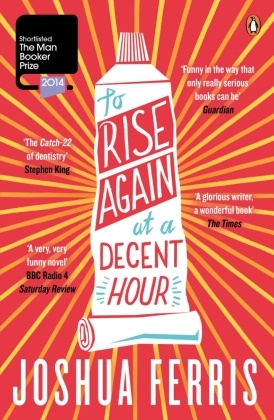 To Rise Again at a Decent Hour

*** Winner of the Dylan Thomas Prize 2014 and shortlisted for the Man Booker Prize 2014 ** * 'The Catch-22 of dentistry' Stephen King Joshua Ferris's dazzling new novel To Rise Again at a Decent Hour is about the meaning of life, the certainty of death, and the importance of good oral hygiene. There's nothing like a dental chair to remind a man that he's alone in the world . . . Paul O'Rourke - dentist extraordinaire, reluctant New Yorker, avowed atheist, disaffected Red Sox fan, and a connoisseur of the afternoon mochaccino - is a man out of touch with modern life. While his dental practice occupies his days, his nights are filled with darker thoughts, as he alternately marvels at and rails against the optimism of the rest of humanity. So it goes, until someone begins to impersonate Paul online. What began as an outrageous violation of privacy soon becomes something far more soul-frightening: the possibility that the virtual 'Paul' might be a better version of the man in the flesh . . . 'Frenetic, very funny, it confirms Ferris as a rising star of American fiction ' Mail on Sunday ' Glorious . . . A very, very funny novel' BBC Radio 4 Saturday Review 'Dismayingly funny in the way that only really serious books can be ' Guardian Joshua Ferris was born in Illinois in 1974. He is the author of Then We Came to the End (2007), which was nominated for the National Book Award and longlisted for the Guardian First Book Award, and the highly acclaimed The Unnamed . In 2010 he was selected for the New Yorker's prestigious '20 under 40' list. In 2014 To Rise Again At A Decent Hour won the Dylan Thomas Prize and was shortlisted for the Man Booker Prize. Joshua Ferris lives in New York.

A genuinely funny book. Not funny in the wry-smirk way of so many 'comic' novels. Actually funny Telegraph